Ohmygod, I don’t even know myself anymore. That Man, Oh Soo is not a great drama, not by a long shot. But why do I find it so easy to watch? Seriously, I was shocked at the end of the second episode that it’s over and I didn’t find it boring or I didn’t have the itch to fast-forward the show. WHAT SORCERY IS THIS? HAVE I BEEN DRINKING THAT MAGIC POLLEN? I saw the second, third, and fourth episode all in one go so what does that say about the show? Or about me? Hahaha! Anyway, my thoughts on the show after the cut! I like that plotwise, That Man, Oh Soo is quick and breezy. I don’t know if the pace is really good or if I just have this magical ability of not being bored with this show. I mean, I’m always surprised that the episode’s over? There are no broody moments and something always happens. I don’t mean to say that what happens isn’t predictable because it kind of is, emotion-wise or beat-wise. But the scenes can be a bit fresh. Case in point, I didn’t expect Yoo-ri (Kim So-eun) to meet Jin-woo (Kang Tae-oh) immediately, by the second episode. They met at the hospital and although I doubt that they really recognized each other after not having seen each other since they were kids, I’ll just accept that. And what a great gag (albeit cringey and embarrassing) is it that she never realizes that she has a bloody nose the whole time she’s talking to him? HAHAHA I was shocked that Jin-woo hugged her though. I mean, even if they knew each other as kids, personal space much??? We also get more information about the magical tree. Apparently, the lives of the successors are linked to the tree. Oh Soo has this tattoo-looking tree on his chest and when it disappears or starts to disappear, it means the tree is in danger, and therefore, probably his grandpa too. Or him, as we see in the photo above. When the tree died, he basically died, until his grandpa revived the tree and thus, him. Grandpa tells him that he doesn’t have any power left to care for the tree and Oh Soo has to take over the task and the coffee shop. It wrecks Oh Soo to have to choose this path but he has to, if he wants to live, basically. So he ends up putting in less time to his IT company, even foregoing an opportunity in Germany. 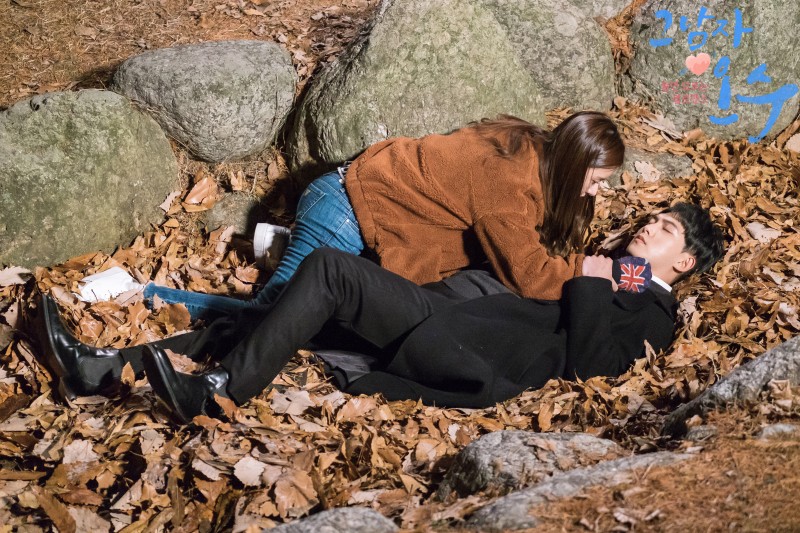 This show loves throwing our characters into situations where they’ll end up having some skinship, as shown above. There was another scene where Yoo-ri fell and he caught her and ended up scratching his elbow. So of course, Yoo-ri treats it for him. It’s cute that Mr. Cold Exterior Who Doesn’t Believe in Love likes Yoo-ri now and Yoo-ri in turn, sees him in a new light when she sees that he’s actually kind. And kind of cute too, especially when he acts all cool and not scared when he actually is. It’s funny how completely clueless Oh Soo is with love that he asks his hyung if there are journal papers he can read about the love advice his brother gave him. Hahaha! I like how scientific he is! I can relate. 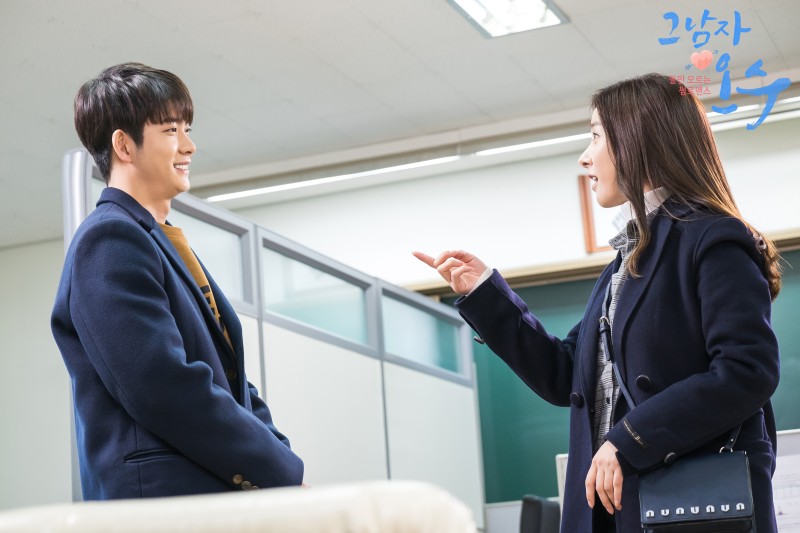 Yoo-ri and Jin-woo end up meeting again and they finally discover that Jin-woo is Yoo-ri’s younger sister’s homeroom teacher. Jin-woo is so happy, he’s shouting and yelling by the school hallway. Yoo-ri is happy too but I don’t think she likes him that way. Although she finds him handsome. Well, I can’t blame the girl. Kang Tae-oh has such a nice smile too. Oh Soo is continuously getting more curious about Yoo-ri and he even follows her to know where she goes with that luggage. Apparently, she feeds stray cats by the hill/mountain and he’s so gullible to her jokes and teases! They are cute, infairness. He’s falling for her, it’s so obvious, but of course he isn’t that convinced yet, although he thinks that must be it. 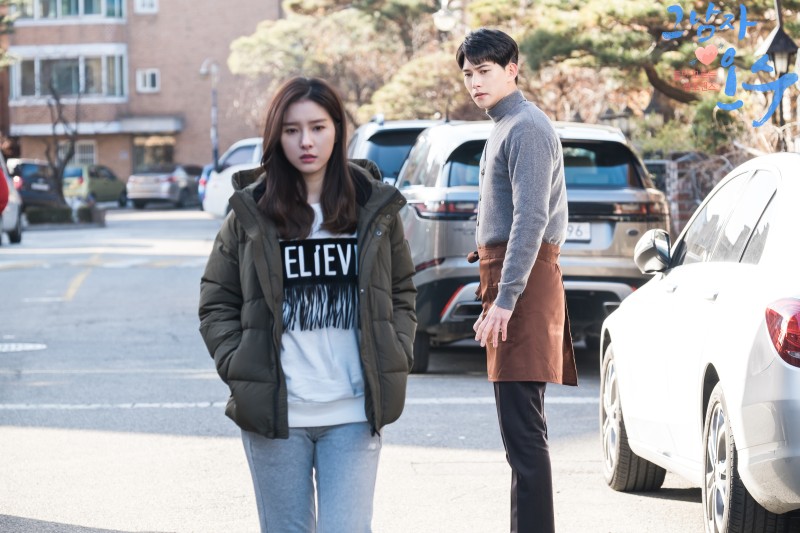 Of course, we gotta introduce some conflict too and Yoo-ri overhears Oh Soo telling his hyung that her kissing him was so uncomfortable. Which isn’t true because he only said that to get his hyung out of his hair. But the damage has been done and Yoo-ri ends up embarrassed and a bit mad. It’s one step forward and two steps backward with these two! I like how Yoo-ri is mad though and was even quite jealous when she thinks the second female lead is Oh Soo’s girlfriend. 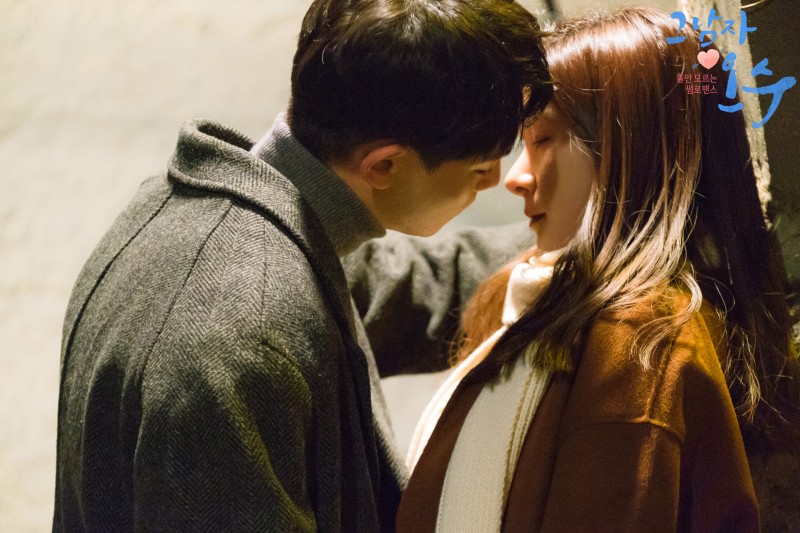 And despite being saved by the boys multiple times by now, I appreciated how they showed that Yoo-ri is a competent police officer, running after a thief and incapacitating two thieves! Oh Soo follows after her but he’s just too late because Yoo-ri’s done all the job. Attagirl! When she asks what compensation would he like for her stealing a kiss from him (she doesn’t even know that it’s his first kiss!), he says that he wants another kiss. OMO! And that’s where the fourth episode ends. Good lord, this show knows how to make me want to see the next episode! Acting-wise, I just accept that Lee Jong-hyun would be the odd man out. He doesn’t necessarily stick out like a sore thumb but he’s the weakest link. He’s effective in his role though so I don’t mind it that much. In fact, he was kind of adorable whenever he’s not his cool self, when he’s showing his dorky and shy side. I admit to squealing at the end of episode four and darn this show because I don’t think I’m gonna be able to quit it? It’s soooooo easy to watch.

As for the editing, I don’t mind it as much as other people, but there are indeed transitions that made me go “??? huh okay”. There were weird shot angles too but I surprisingly don’t mind these technical fails. That Man, Oh Soo continues to be a light and breezy watch, and something I can unwind to and enjoy. Not even ironically. I actually kinda like it, as well as the characters. I hope it doesn’t devolve into an unnecessary angstfest like My Secret Romance by the end though.

I don’t know if I’ll continue That Man, Oh Soo though when my schedule gets busier with the premiere of upcoming dramas (and then we have The Great Seducer which feels like it’s gonna be my crack drama) but for now, I’m tuning in! (And why is it so easy to churn in words for this show?)