It’s an EXO edition for this film review post! There was a night when Lianne and I saw both movies one after the other. She watched for Chanyeol and I was there for Kyungsoo (D.O.). My thoughts on both movies are under the cut! 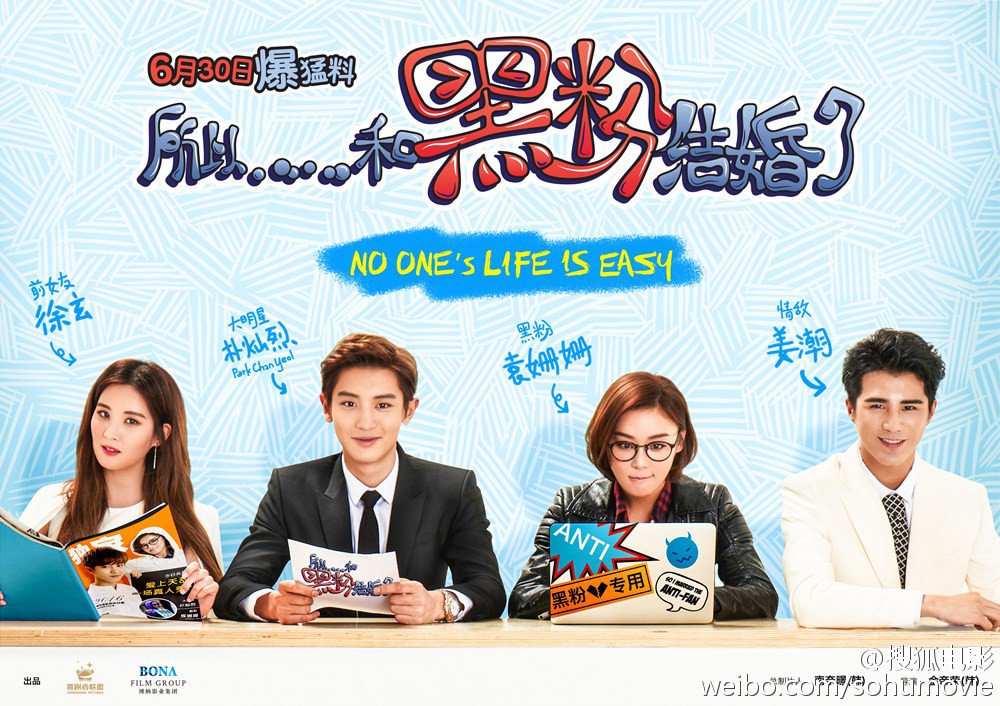 So I Married an Anti-fan (2016): I ended up watching this movie because my sister wanted to see it in HD (she’s such a Chanyeol trash, she saw a camrip last year) and so I can judge who’s the better actor between Chanyeol and Kyungsoo. Chanyeol was okay, a bit stiff but serviceable. I think he did fine with his character but his performance was not moving, mostly because of the script of the film. The characters were half-baked and the film failed to show the natural progression of the main couple’s attraction and thus, their relationship, so I didn’t really connect with the romance. The female lead was not necessarily unlikable, but I didn’t connect with her, so I couldn’t get on with her character. I know haters really exist and I do think they could be extreme at times so sure, the female lead can exist in the real world. Still, her actions were absurdly immature that I can’t get onboard with her character. (And she’s supposed to be an aspiring journalist so uhm, would you honestly do that???)

Moreover, FALSE MARKETING!!! With that title, I thought I was in for a contract marriage or whatever, ANY KIND OF MARRIAGE. But they didn’t even marry!! Even at the end!!! What is that title for?? They didn’t even live together. I was expecting AT LEAST THAT.

Basically, this movie has been quite the disappointment. I wished there were swoony scenes to compensate for the lackluster execution of the plot but there was nothing that worked on me. Now that I think about it, the leads didn’t have chemistry too. Moreover, the second leads were also ineffectual. SNSD’s Seohyun only had one expression on her face most of the time too so meh.

So, a hard pass on this one. I’d only recommend this to Chanyeol stans because he is indeed cute in here. That I could enjoy.

My Annoying Brother (2016): NO ONE TOLD ME I’D CRY WITH THIS ONE. It’s not heartbreaking all the way through BUT STILL. I knew this was a comedy-drama but I thought that the drama part would only be Kyungsoo’s character going blind (not a spoiler, that’s the plot) but *sigh*. I really was not prepared for the torrent of feelings. I thought this was going to be something with lots of comedy because it’s Jo Jung-seok. Don’t get me wrong, it was fun and I admit to laughing quite a couple of times. But I also should have known that Jo Jung-seok is SO good at dramatic scenes too that him being in here does not equate to a comedy. Haha!

D.O. was amazing in this one. His acting really has nuance, which Chanyeol hasn’t tapped into (yet?). The film, while common in plot and emotional beats, was buoyed primarily by the chemistry of D.O. and Jo Jung-seok. They were both so amazing. Honestly, I didn’t even see them as actors but as their characters. After my initial flailing with Kyungsoo (SO CUTE BB), I was swept up with their acting and the story and all the emotions. This film had me busting a gut a minute and then warming my heart the next second. Park Shin-hye didn’t do much in this film in my opinion but that was fine. It’s just a bit sad that the only female character wasn’t fully fleshed out. The film was all about the brothers so I’m not enraged. I really enjoyed Kim Kang-hyun’s character though!

P.S. Don’t worry, it’s not a love triangle. THIS IS ALL BROMANCE. This hyung-dongseng relationship felt so real that I think Jung-seok and Kyungsoo are close IRL.