…should have been my blog URL, dammit. HAHAHA

I mean, this governs my life. It doesn’t mean that I only wear dresses when I feel ugly but when I do feel ugly, you bet I’m wearing a dress. Like the second day of my period last week where I also incidentally had a zit. I felt so ugly I didn’t want to go to work. Of course it was the hormones talking but if I can’t feel it inside, I gotta harness the confidence from outside, right?

So I wore a dress.

I had a photo of my dress that day because my friend asked for one after I ranted about how ugly I felt and how I wore a dress to combat it.

I posted this in my other blog so might as well post about it here! The prompt was anything about TV but I chose to write about shows I love. Not included are Asian dramas because that’s gonna be so difficult to do HAHA This is in no particular order but I will dividing them into two categories: the 20-minute shows and the 40-minute shows. And I suck at categorizing into genres so I just put what Wikipedia says.

For My Short Attention Span 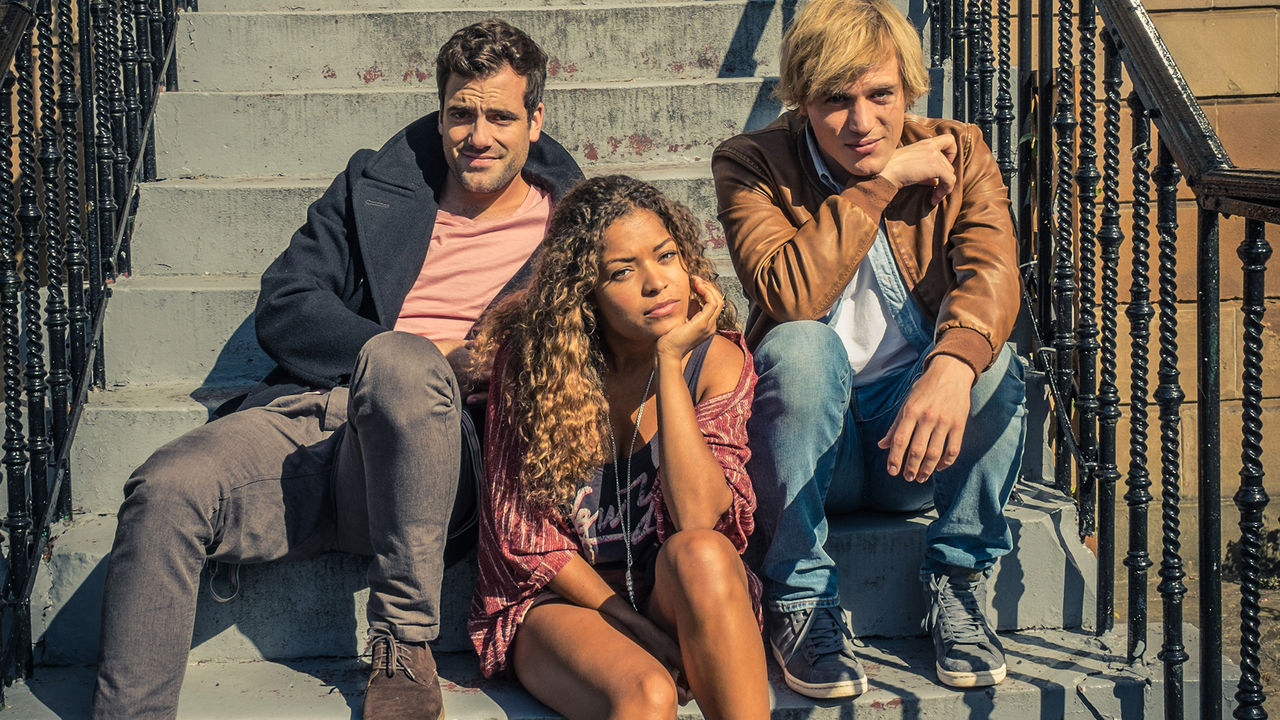 This gem is only six episodes long so if you have three hours to spare, please PLEASE get on it. It’s on Netflix! Anyway, I discovered this show from Elena‘s newsletter (I will always miss her blog Novel Sounds) and THIS. SHOW. It’s just so full of heart and some crude jokes as well, I mean, look at the title. But I promise, despite the title, it’s not that kind of comedy (although I do dig that kind of comedy as well). So plot! Dylan gets chlamydia and now he has to contact all his previous sexual partners to get them to test as well and we recall one girl in every episode. THE FEELINGS THIS SHOW EXTRACTED OUT OF ME, YOU GUYS. THE FEELS. I rewatch it a great amount and still, FEELINGS. It’s just so sad it looks like it’s not gonna be renewed.

OH MY GOD IT’S GONNA BE RENEWED THERE’S GONNA BE A SECOND SEASON THIS NOVEMBER OHMYGOD THANK YOU, NETFLIX!!!!!!!!!!!1111 And the title was changed to Lovesick so be sure to check that one out. OHMYGOD I’M SO HAPPY AFTER TWO YEARS

There was no way You’re the Worst wasn’t gonna make this list. Sure, it’s a rom-com and we’ve seen that way too many times (but I can watch it forever) but one with such horrible and mean characters as the protagonists? I’ve never seen that yet and that’s why I’m all aboard this one. These characters lie constantly and are brutally honest to the point of assholery but who doesn’t want to be like them, being able to say what you’re really thinking? And despite them being horrible people, you root for them because they’re very human and vulnerable too. JUST WATCH THIS ONE, PEOPLE.

To the show that saved me from being depressed earlier this year, I love you. You might be repetitive plotwise but I love your characters and your crude jokes and how you make me laugh I sometimes cry. Thank you for being there. I mean, I always love a misfits-get-together-to-achieve-a-goal-while-shenanigans-happen kind of show but make these misfits programmers and geeks and nerds and I’m all aboard. Jared bb, you’ll always be my favorite and the one that makes me laugh the most. I mean, just watch “tip-to-tip efficiency” on Youtube. If you like it, you’ll like this show. HAHAHA

I Just Want My Pants Back (genre: comedy-drama)

This show was cancelled and it’s such a shame. It was an MTV sitcom back in 2011 that completely got me: music tastes, crude humor, quarter life crisis, hipsters in Brooklyn being broke and making bad decisions. It was MY show. I watched this show with my guy BFF and another friend and it felt like we were the only people watching this show. It’s the reason why I love Peter Vack so much despite him being my least favorite character in here. I’m loyal. So if this is something you think you might like, please give it a chance! Then talk to me so I can have someone to talk to about this show. HAHA

I can’t choose for my fifth 20-minute show sorry HAHAHAHA What? I love my sitcoms!

Shows I Can Sit through for More than 20 Minutes I’ve once proclaimed Suits to be my favorite show, to which my friend judged me. Hahaha! I know it’s cheesy as heck but I love the characters and even though I’ve found myself almost quitting it a lot of times, I can’t. I just love the characters so much that I’m still here until Season 6, binging it every time the midseason/season ends. This show just makes me smile and chuckle and panic and also hurt.

Uhm, hello, I AM OBSESSED WITH THIS SHOW. It’s like I spend most of my time on its subreddit and just thinking about it and watching it and rewatching. I’ve never been as obsessed with ANY show as I have with this one. It is so fucking great I do not know how to pitch it. I mean, everyone’s saying it’s great and that you should watch it. I know that sounds like hype and hype is scary but the hype is real, man. It is real. Rami Malek is such a great actor, along with everyone else in this show. Good lord, the oodles and loads of talent on this show, not just from the actors but from the writers, directors, cinematographer, and of course its creator, Sam Esmail. GOOD LORD.

Before I got obsessed with Mr. Robot, Homeland was my top show. I was so addicted to this one. Not to the point that I was always on reddit but I discuss it with a lot of friends and just have so much feelings and thoughts about it. I read recaps and reviews though (which I don’t do with Mr. Robot) and I participate on Twitter discussions. It’s such a great thriller and the acting is so great. Hello, it has won all these awards and it is well-deserved. I can’t even explain why and how great it is because it just deserves to be seen. It is soooooooo good. Like I said, I find it hard to sit through more than 20 minutes for a show but I binged the first three seasons of Homeland and have been following it ever since Season 4. GOOD LORD THIS SHOW I NEED IT. I hate that it’s usually a fall show which starts on September and now it’s pushed back for January 2017 for its sixth season. 2016 HAS NO HOMELAND AT ALL HOW CAN THIS BE

So if you know me, I’m quite not into fantasy but boy was this a delight. That’s how I’d describe it: delightful. I love the whimsy, the colors, the characters, the narrator, and its heart. Oh, I remember binging all seasons of this one with the small TV I had in my room. My TV’s screen was so small but I had fond memories of it and this show. Now I wanna watch this again! So plot: Ned the Piemaker can bring back things to life but he can’t touch them again. If he touches them again, they die. Now, he brings back from the dead Charlotte, who he loves. But now they can’t touch because Charlotte AKA Chuck will die again! Oh glorious, glorious trope. Also, if he revives a thing/person for more than a minute, another thing/person dies in the vicinity. So he uses this power to help solve cases. Anyway, from the same creator, I also loved Wonderfalls and Dead Like Me! I should really watch Hannibal. Just you wait, Bryan Fuller.

Okay, it seems like I do love USA Network shows even though they get flack for being cheesy but WHATEVER MATT BOMER. I religiously watched this one back then and enjoyed every moment of it. Confession: I haven’t watched the last season because I didn’t want it to end yet. 😦 I initially watched this for Matt Bomer because HELLO GLORIOUS but I ended up loving the characters and their chemistry. Basically like what happened with Suits as well. Sigh, I just love banter. AND HELLO MATT BOMER

What are your favorite shows?

So I think I finally figured out why I’ve been MIA here. Even before I lost my phone, I uninstalled the WordPress app, thinking it was a source of unproductivity because I was always at it. But then even though I uninstalled it, productivity was still low and I just ended up not blogging. Sometimes I get ideas for blog topics and it vanishes into the ether because I wasn’t able to write it away or even note it down. And I had a lot to say in the months I was away but always no energy or drive to open my laptop and type.

But with my new phone, I hope I end up blogging more. I just installed the app and I’m typing this post with the app. We’ll see how many posts I actually end up writing from here.

Hoping I’ll see myself around a lot on this space! Haha!

P.S. A LITTLE LIFE as the photo because I bought it last night because I was sad and what better way to be sad than reading a sad book, right? Also, I just found an edition within my price range. Hahaha! I’ve wanted to read this book for so long!